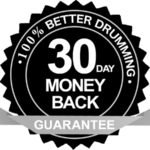 This is an idea I’d like to get across to you very clearly. There are many reasons why drums are edited today. Unfortunately that has become the norm, and I think it’s a big deal. So I’d like to make you see another way to think about it.

It all goes back to the advent of drum machines in the 80s. Until then, music was played quite freely, spontaneously. Using the metronome was not that common, not even in a studio setting.

The tempo of a song could fluctuate a bit and also the performance was considered good enough because it felt good, and not because it was necessarily perfect. Just listen to any record from that era to hear what I’m talking about.

Then machines came in, and set a new standard of accuracy. Actually, an impossible standard. We humans will never be able to match that level of absolute artificial precision. And that’s a good thing (more on this later).

The thing is, the dominant music scene tends to determine, like for everything else and in all aspects of culture, what becomes the new norm. And when the new norm became computers, that was it. Drummers were required to perform at that same level and adjust their accuracy and timing so that everything could sound good when played in sync with sequencers and programmed parts.

Let me make this clear. There’s no technology that can be considered good or bad in an absolute sense. It’s always a matter of perspective. Any advancement in technology is just a tool, and then it’s the use that we make of it that makes it good or bad.

That’s why computers have actually been incredibly beneficial to music, in countless ways: they speeded up the creative process, they allowed for infinite experimentation, they made it possible to invent new sounds, they allowed anybody to have their own affordable gear to write and produce music, they enhanced sound quality… lots of good things. Also, as far as drumming goes, they helped improving technical proficiency and developing our inner clock, besides giving many stylistic inputs.

Yet, there’ s one thing computers took away from music. Or, more accurately, one thing that we allowed them to take away from it. And it’s unfortunate that that happens to be the most important one of all: the soul of music.

Yeah, but why, and what is it? What do we mean for soul of music, where is it located? Simply put, since music is communication, it’s the sum total of all the nuances, subtleties, variations, that contribute to create strong emotions in the listener. Guess where all these subtleties are to be found? Exactly in the imperfections!

Of course the standard has to be high, and even professional if you make a living with music (or just, generally speaking, you want to make quality music). But that’s a subtle distinction because quality has nothing to do with perfection.

When I say imperfections I don’t mean mistakes. Of course we want music to be played well and to sound defined and accurate. I’m talking about flaws constituted by the gap between what a good (or even great, for that matter) musician can do, and what a machine can do. Imprecision due to expressive performance.

I sometimes happen to work with producers who are obsessed with quantizing everything. As soon as I’m done recording they hit the ‘beat detective’ button and destroy the performance. It makes it sound ‘right’, even ‘too right’, but the magic, the vibe, is gone. I can’t tell you how many times I proved to them, with blind tests, that the same take sounded better without any quantizing than when it was sliced and put on a perfect grid. They almost always admitted that they liked the unedited take better.

In fact, do you know what all great producers do to make electronic music sound better and have a great feel? They try to emulate human imperfections. In recent years even software like Garage Band and the like have increasingly started to include features that try to imitate very closely the way a real drummer sounds. Fortunately, they are not quite there yet 😉

The bottom line is this: it doesn’t have to be perfect, people don’t relate to perfection, but to truth. 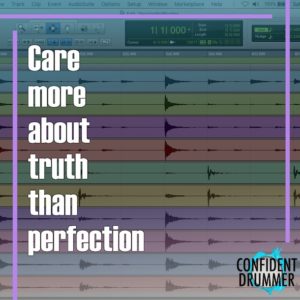 So, you probably knew all of this already. Now, let’s get to the core of the matter. It’s time to apply these concepts to our playing.

The approach that I recommend is very simple and is based on 2 steps:

1- Do your homework. Practice with a click, record yourself, develop your timing skills and work on your technique so that you can play whatever you want and stay relaxed and balanced, with a great sound and with total effortlessness.

2- Capture the truth of the moment. When you are being recorded, play with the same approach as if you were live on stage. The same intention, the same passion, the same intensity. There’s no chance to fix anything afterwards, you have one shot. It doesn’t mean you have to get anxious: there’s no reason to try too hard or cling. If something is not working as you would like it to, go back to step number one. But, for that day, accept your limitations.

Using this simple philosophy we can avoid falling into the trap of playing a thousand takes, and wanting to redo things until they are ‘perfect’. Live with it, nothing will never be perfect. But it’s ok, because it only has to seem ‘perfect’, even if it’s not. And the way to make it sound perfect is to focus on grooving, having a good time feel and enjoying what you are doing. That immediately makes it good enough. When ‘good enough’ does the thing that music is supposed to do, create and communicate emotions, then you are doing great.

Personally, I came to the point where I never edit anything I do. Not because I’m flawless, but because I came to appreciate the fact that a full unedited take is true, a lot more than I like the idea of it being perfect.

If you like you can check out this YouTube video I recorded a while back during a studio session. It’s one full take. If you listen carefully you can notice a few imperfections. It’s not flawless, but it’s authentic.

A full take is a snapshot. It’s like a photograph of that unrepeatable moment. That’s where the magic is. You know what a shame it is to throw it away by fixing it and making it artificially impeccable? What you really had to say, what you really put in there gets obliterated the moment you press the edit button.

One additional aspect is that, since music is communication, any performance, being it a song, a solo of a whole show, is like a story. A story can only be told from beginning to end, if we want it to have an impact on the listener. If a story is fragmented, and then put back together like a puzzle, the listener subliminally feels some kind of disconnect. A whole take is that unique, complete story. Why waste it and turn it into a fake plastic image?

Truth and authenticity are the only currencies, are the only things we all really desire. So when we see, hear or feel truth, we feel connected and we enjoy it tremendously. Art, is ultimately truth. There’s no art in perfection.

I stress this aspect because I know of many drummers that in the studio record 8 bars at the time, until they get those right, and then move one to the next section and do the same until the end of the song. What kind of art is that? It doesn’t make any sense to me.

There’s only one exception that I make, and that I suggest you take advantage of as well. As I said, technology is a tool. That means that it can be used to do useful things, if we go intelligently about it. For instance, let’s say that I played an amazing first take of a song, but, being it the first time through, I messed up a passage. It would be a shame to throw away that cool performance just because of a mistake.

That’s the only scenario in which I occasionally use editing. In a very basic form, which is, I copy one or two bars from another take, and I paste it into the take I like. That’s called ‘composite editing’ and it’s very different from ‘quantize editing’ and from moving notes around. I will discuss this further in the future, because in the studio it’s actually important to capture the beauty and spontaneity that only happen within the first 3 or 4 takes.

Any time you feel tempted to fix a performance, remember this: unless you are trying to prove or to demonstrate something, there’s nothing to fear in publishing imperfect stuff. It’s all in your head. It’s the ego that wants it to be perfect, not because it likes beauty, but to cover its ass, and its insecurities.
It’s very likely that the listener will enjoy the flawed version a lot more than the perfect one.

Steve Jordan in his DVD did a drum solo, one of the few he played in his career. During that solo he dropped a stick, and it took him a while to grab another one. He was in the studio, he could have done another take. But he left it as it was. Because it was beautiful that way. And authentic. Would you have had the confidence to do the same?